Tarot Swords are one of the Minor Arcana suits (Cups, Pentacles, Swords, and Wands). Each of these suits is designed to reflect broad circumstances of life, but in totally different areas such as emotions, material comforts, thoughts/ideas, and passions/desires, respectively. When you’re learning to read tarot it can seem like information overload to learn the specific meanings of each card, but once you understand the overarching basics the specifics will become easier. Here you’ll be able to learn the generalities of the Suit of Swords and then you can click on each individual card for more precise meanings.

The Minor Arcana is only part of the tarot deck. If you’re looking for the Major Arcana, please click here. 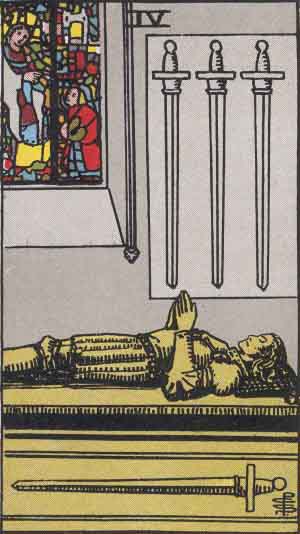 The Tarot Swords are reflective of thoughts, communication, ideas, and intellect. Basically, they focus the things which make up the majority of how you interact with other people on a personal level. Swords can be quite helpful in identifying personal communication styles because clear communication is extremely important in navigating the world and interpersonal relationships. I prefer the original Rider-Waite deck, which uses typical sword imagery, but many decks exist and you can find one that speaks to you.

The Suit of Swords can be correlated to air symbolism and is intertwined with the zodiac air signs (Gemini, Libra, Aquarius). Air sign traits are usually very good at communication and generally get along well in social situations because they are intellectual, curious, and enjoy analysis and debate. Just as the air can be a soft breeze or a howling wind, the behaviors of communication can run an equally wide gamut. The world of ideas is grand and expansive and without effective communication it’s impossible to transform a thought into a connection. Air sign traits also rely heavily on using logic and careful analysis of a situation rather than acting on emotions alone.

Another trait that Tarot Swords point to, specific to behaviors, is the free spirit. Choosing to live by your own terms, and not by someone else’s standards, is integral to being a free spirit. Like the wind, these personalities can change direction to a new belief or goal in a split second. Having the ability to analyze our surroundings, our lives, and our beliefs is extremely important. It’s impossible to build the life that will make us happiest if we wouldn’t know what we really want. The Swords are going to be especially helpful in challenging us to examine what we think we know against the risks of what we don’t know. These cards can help identify, and clearly communicate, a person’s needs, wants, and goals. 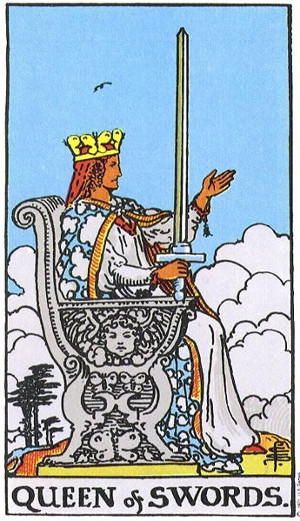 Let’s look at how the suit is laid out. Within the Suit of Swords there are 14 cards, total. There is the Ace, where the suit begins, cards 2-10, and then the face cards which make up the final four and culminate with the King.

The Ace of Swords is the starting point of the suit and generally means a new beginning is going to occur. Most of the time new starts are a good thing, but it doesn’t mean they are an easy experience.

Next, the number cards come in sequence from 2 to 10. These cards are symbolic of a journey, from easiest trials and tribulations (at 2) through increasingly difficult challenges, until finally 10, the end point, is reached. In some suits, such as Cups & Pentacles, the 10 is a joyous card full of celebration and happiness. In Swords, however, the 10 is a less positive ending, one that comes with sadness, disappointment, and even devastation. A journey doesn’t always end on a positive note and it’s important to remember that not all readings have happy themes.

Finally the face cards tie up the Tarot Swords. Starting with the Page, then the Knight, next the Queen, and culminate with the King. The purpose of the face cards (or “Royal Arcana”) is different than the number cards. The number cards show a journey, the actual events which will unfold, but the face cards hone in on a person/personality. They point either to a specific person like a mother figure in the case of the Queen, or to an archetypal personality trait such as authoritarianism in the case of the King. They’re going to highlight actual behaviors and traits instead of events.

So, with all this new knowledge at hand how do you put it together? By looking at the big picture. When interpreting a tarot card spread, taking into account more cards will give you a more detailed reading. Trying to give a useful reading from a single card is extremely difficult and there isn’t often much information you can share with the querent. The entire Suit of Swords tells a story, as does the tarot deck as a whole. The best practice is to remember this and use several cards to see the story from start to finish.

"I'm still not sure what this means for me."

"I don't want to learn to read tarot, I want a professional reading!"

If this sounds like you we have the perfect solution! First, tell us a little about yourself. Next, received your personalized tarot readings straight to your inbox every month. If you read your daily horoscope you need a monthly tarot reading! You will get a reading immediately upon signing up and on the first of the month, every month thereafter. Make life easy on yourself and "set it and forget it".